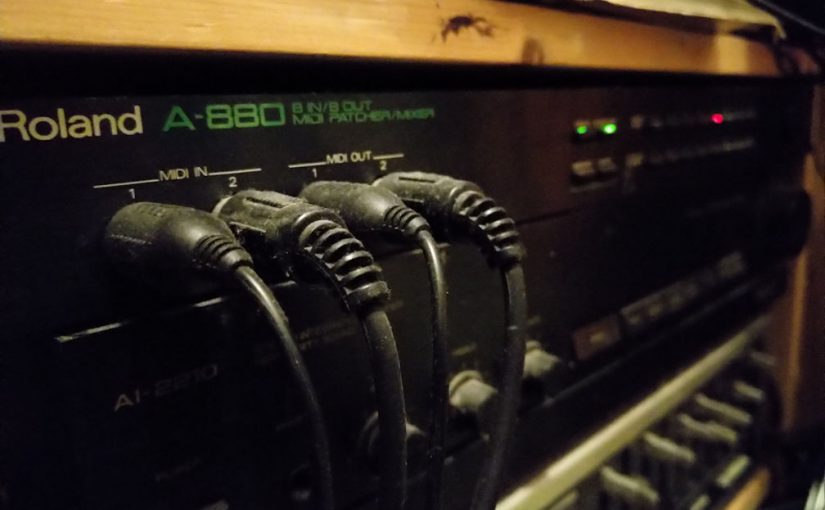 Recently I had to revise some cabling and routing under the mixing desk, when I found a rack device. A MIDI patch bay, the A880. It was happily blinking and had silently done its useful job there for at least 10 years. After looking it up, it turned out to be an actually more than 30 years old product from Roland! You can also see the dust on the cables in my setup.

Then the question is: do you need a MIDI patch bay? The answer is twofold. MIDI itself is an ancient protocol. If you have MIDI devices and a computer hooked up via MIDI, I will say that you cannot do without a MIDI patch bay. However, MIDI is showing its age and probably some of you are using USB instead. Also, new MIDI standards are now seriously being discussed. Possibly resulting in something altogether new that may not be supported by the A-880.

The current standard MIDI protocol is ancient. And when you look at it technically it is also slow and limited. Of course it is fast enough to connect a keyboard to an instrument or a computer. Most devices allow daisy-chaining to connect any chain of computer and keyboard and MIDI instruments you have. However, that is when you will find that MIDI has its limitations. If you daisy-chain more than three devices you will likely hit one of its limitations: bandwidth. When too much information passes through a single chain, then you will get traffic jams and you might start hearing hick ups.

This is where a MIDI patch bay kicks in. Instead of daisy-chaining you can now connect devices in parallel. The A-880 connects 8 inputs to 8 outputs. Each of the individual connections to a midi device from the patch bay can now pass the maximum amount of data without traffic jams. Also with some simple button presses you can determine which input gets sent to which output. Allowing you to have more keyboards and route inputs from there to more devices. The forever friendly blinking lights show you which inputs go to which outputs.

Inputs 1 and 2 are special. They are positioned on the front panel and easily reachable when you assign those as merging inputs (<- edited because of Fred’s comment below). I use the patch bay in its most simple and useful form. The inputs from my main master keyboard are mixed with the input from the computer and then sent out through all remaining outputs at once. This is the blinking pattern that been the core of my setup for more than a decade. Only occasionally I push the Signal button. Then the blinking lights show which devices actually send data.

It may be that the future of MIDI does not include the A-880. This will be the moment when I will switch off this blinking, silently working work horse. And I will remove it from its hidden place under the mixing desk.

7 thoughts on “Silently hiding under the mixing desk: Roland A-880”