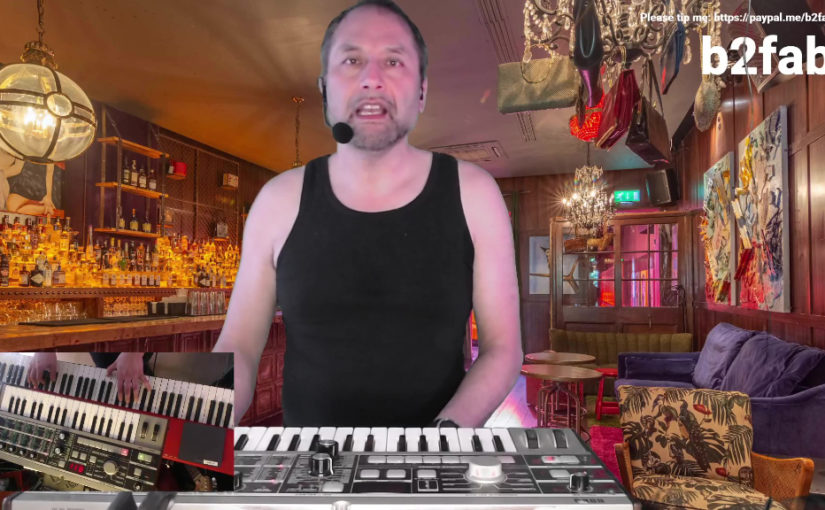 Yesterday I did a live stream with a new head microphone or headset mic and for the first time since using it, something went wrong. Kind of spoiling an hour long live stream. Before this I used my old faithful AKG D330 on a microphone stand, but when streaming, visually this was kind of a pole with a big thing in my face. So, enter the Samson Wireless Concert 88x I chose this mic because it was affordable and suited for singing. Worth an experiment.

A lot of these affordable headset are for sport instructors, so more intended for the frequency range of the spoken word. Also a lot of the smaller, more invisible, headset mics have an omnidirectional sensitivity. I was worried that such a mic would pick up the key clicks and foot pedal stomps. This mic has cardoid sensitivity that seems to only pick up my voice and not any of the noise from playing. Comfort while wearing is also an aspect and adjustability. On most aspects this mic is fine for me. Audio quality is a little less transparent then the AKG, but acceptable.

The first reactions on the looks in the live stream are positive. Visually this is an improvement over a big round mic on a stand. One aspect of these mics is that, because they’re stuck to your face, you can’t vary the distance to the mic anymore. Any intention or emotion you want to add, by yelling with the mic far away, or whispering with the mic close by is impossible. Some singers that want to belt with the mic far away will feel limited. In my dreamy pop songs I am missing it a little, but not a lot.

The first real pitfall I fell in was yesterday. Because I wanted to drink some water before going live a moved the mic a little bit from my face. Then in the live stream someone remarked that my voice volume was so low. I started fiddling with the faders for the mic, but only after watching back the live stream I saw that it was too far from my face. Caught by the cardoid sensitivity!

Some other downsides are when I breathe through my nose, the wind blows straight into the mic. Resulting in a rumbling sound. Also, one of my songs starts with a part where it’s like i’m calling a friend and speaking into the answering device. The design of this mic more that ever makes me look like a call center employee hahaha.

Another aspect is that it is a wireless model. I chose this because eventually I want to play really live again and it would be convenient. It means however that I now have to rely totally on a set of batteries. When you buy an inexpensive set like this, there is no battery indicator. For now it seems reliable in battery life and there have been no problems with the wireless connection. I’ve had maybe 6 hours of operation from the first set of batteries. I hope it won’t fail on my while playing live. Knock on wood.

I’m also the kind of person that immediately starts using a new gadget like this. Tossing aside the manual. But browsing through it after some days I found out that you should not skip reading it. Here in the studio it works out of the box on the default frequency. Live however you and I will undoubtedly have to fiddle around to find the best frequency and you need instructions from the manual to set up right.