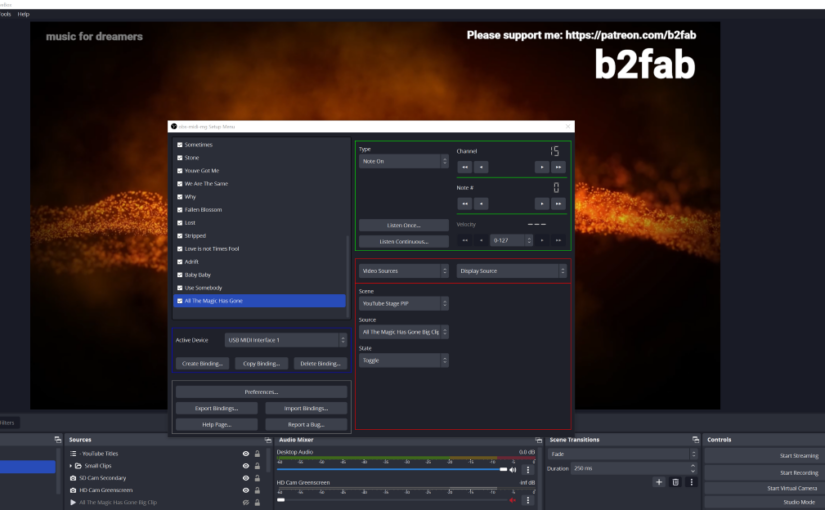 Up to now I had to rely on a separate program MIDIControl to catch MIDI events and relay these to OBS . I can tell you that any chain of devices or software is easily broken in a live stream. More then once I was in a situation where it simply didn’t work. No harm done musically, but the show does look a bit more bland. Lately a new version of OBS broke the link permanently. I had to wait for an update for the MIDIControl program.

This triggered a new search for alternatives and I found one in the form of a true OBS plugin: obs-midi-mg. The first version I used was a 1.x version, the latest version 2.2 has lots of improvements in the UI. In the first version you had to step into binding, step out and step into action to make a scene change work. Now it’s all on one page, like you can see in the screenshot in the header. The big improvement for me is that it is simply there when you start OBS. No need for the chain of programs to be up and running and connected.

For capturing MIDI I use a simple and cheap USB MIDI interface. It even does not have a brand I think. MIDI on windows is very sensitive to plugging it into a different USB port, that is why I put it on a separate interface that never moves. The plugin is setup to listen for a note being played and then trigger a video source to be shown. The video source starts playing from the start when becoming visible and never loops. I keep a spreadsheet with all the bindings to keep track of the note numbers used on different channels.

I hope I have inspired you to make MIDI control a reliable part of your live stream. There are many more useful applications possible. Also for instance using a Launchpad to trigger actions on sources in your Scenes.