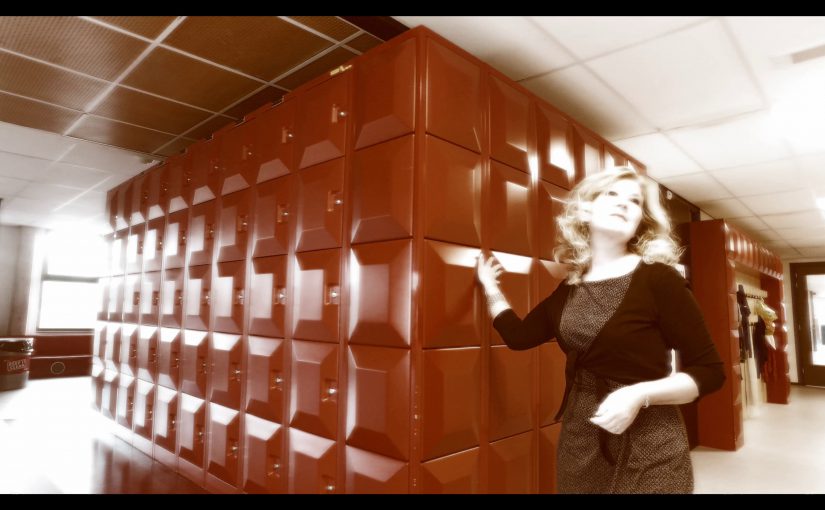 Telling stories through songs. When there is no story I have no drive. Sometimes I actively scout for interesting stories. A sequence of words. A thought. Serendipity. Usually a picture forms in my head that shapes the story and that is when I start thinking about a clip. Last year this was very strong when Sam came to work on Memories. Its actually one of the first songs that I posted on SoundCloud, but Sam shaped it, rewrote the lyrics and sang it in the attic.

The original song was inspired by a school reunion. A magic event that reshaped my past, because most of what I remembered actually was wrong or incomplete. It seemed apt to make a video clip for it that somehow would take you back to school and down memory lane. But, how shape this image?

Usually I try to cast the original singer and maybe let him or her sing at least a few lines in the clip. I got into contact with the head of my old school, not far from Leiden, in Sassenheim. He arranged the possibility to shoot a video in the school. First everything seemed fine, but then came the terrible news that Sam could no longer take part in the project. No conflict, but personal problems. Disaster. Sam recovered, but still could not take part in the project. However, she agreed that I could use a stand in. She took part in the final result from the sideline.

A clip needs a story!

The first thing I try to do is write down the story of the clip, but in this form. A form that works for me:

This way I can answer all questions that people involved usually have. How long do you need to shoot in the school? Which locations? What to wear? Earlier I would just take my camera and go, but I found that when you start filming that its nice to come prepared. Also, it really helped a lot that I already knew the school and made an extra visit to fill in some details.

In this case Ingrid saved the whole project. She agreed to be the stand in for this clip and she is such a graceful and beautiful lady. Throughout shooting she remained strong and focussed. Even when we somehow seemed to be locked up in school by the cleaning ladies.

A short word on equipment. I have invested in a Panasonic system camera that is capable of shooting 4K. It has image stabilization, but when shooting a shot while moving I now insist on using a gimball. When movement is not smooth its just not right, or it has to be a special effect. For shooting while moving I use the DJI Osmo that has a 4K camera attached. Earlier I found out that insufficient lighting can ruin recordings, so I also invested in special 1000W video lights. I always try to reuse the recordings in the form of making-ofs. For this shoot I also brought the VR 360 camera and an action camera to shoot the recording setups while recording. Makes sense? I hope so.

Why 4K? I have found that when the starting material is 4K, a resulting HD movie is of higher quality than a movie shot with HD equipment. Its the pixel interpolation that somehow results in a sharper image. Also, if the end result is a 4K edited movie, it is also ready for the foreseeable future of video. And if the end result somehow has imperfections, it is possible to cut out the best bits while keeping a HD quality result. Also 4K has overall better quality. No more jaggies much less moire. The only thing that I have saved on for now is framerate. My budget unfortunately does not allow me to shoot 4K at more than 25 frames a second. For now it will have to do.

…but how to use it

What I try to do is to set up all equipment manually. This is extra hassle and extra risky, but what I try to avoid is to have all equipment think for itself. These camera’s all have auto-everything settings. These settings make smart decisions to make sure the subject(s) that you film are well lighted and in focus. However, when filming I find that a camera may suddenly shift to new settings for the best lighting and focus in the middle of a recording. This will make it more difficult in the final video production to choose the correct color tones and lighting. Shifting focus in the middle of a recording will probably make the recording useless. So everything is set to manual, focus and lighting will be fixed.

In the school setting the use of my video lights with a fixed color tone makes sure that the prevailing color tone of the recordings is also fixed. For the final video production I chose to give the whole clip a warm summer tone. Even when the clip was shot on a cold and cloudy autumn afternoon.

And there is more

For this clip I also made sure that Eline from Beauty & Visagie could be there. While recording I am already juggling all the equipment and video shooting. Eline made sure that Ingrid looked her best and remained stunningly beautiful throughout the whole afternoon. She also checked clothing and made sure that colors did not clash and that contrasts were in check. Walter also assisted, supported Ingrid, guarded stuff while we were running around and made sure we had power.

During recording I continuously play the music from the clip to make sure that the ‘rhythm’ of all movements matches. It also helps making sure that the mood is correct. Even though the final production might not be very pro. This way at least it will have the right flow and mood to match the music.

Also I always make sure that everyone in the clip is aware that it will be put on YouTube and made public. For these occasions I always carry paper release forms that people can sign to agree to ‘be in the movie’. For the people directly involved I just ask, but for strangers it might be best to let them sign a form.

As always: this is just the way I try to work and this is a reminder to self. Maybe it helps you.

One thought on “The making of a video clip”